My first post for 2016 had to be a special one. New Year’s eve for me and Sahil is mostly at home. We either host a family dinner or a house party with close friends. Once it’s closer to 11pm, we step out and drive around to catch a glimpse of the breath taking fireworks which has tourists from world over flock to Dubai.

This year however we were in mood for something outdoorsy. Josh, my colleague suggested we join him and my other work mates for a camping trip. On a side note, Josh is also a founding member and lead vocalist / guitarist for the popular Dubai band Candy Flippers. Go follow them because they are aaaahhhmaazingggg!

We settled for a BBQ themed camping trip in Ras Al Khaimah desert. The build up to the new year’s eve was amazing as well. After endless banter on a common Whatsapp group and 4 trips to the hypermarket we were well stocked.

It was fun going to the mall looking for camping supplies since this was my first camping experience in the desert. It was magical to say the least!

I was in-charge of catering to the vegetarians in the group. I decided to go for Paneer Shashlik, Veggie burgers with caramelised onions, roast potato pouches and grilled assorted vegetables.

Here I am sharing the recipe for Paneer Shashlik or Paneer Tikka.

Heat oil in a pan and add carrom seeds. Once they splutter, add kasundi paste and red chilly powder. Let it cook for a few seconds and add chickpea flour.

Keep stirring continuously on low heat until the mixture gets some color. Take it off the heat and pour over the yogurt mix.

Blend the mixture lightly and add the paneer, onions and peppers and coat it evenly with the mixture. Refrigerate for at least 2 hours.

Once you are ready to cook, you can start assembling the paneer tikka on a skewer.

If you are using the bamboo ones, make sure you soak them in cold water beforehand so that they do not burn when placed on the hot BBQ.

I decided to go for the stainless steel BBQ skewers given they seemed sturdy and could make more servings of the paneer tikka in one go. Also they last you many BBQ trips, I got mine for AED 8 for a pair of 4 from Carrerfour.

Now let’s get on to the assembly part, you begin by oiling the skewer well. Add one cube of red pepper followed by one cube of yellow pepper, then one cube of capsicum and lastly one cube of onion and one cube of paneer. Follow this for step for the rest of the mixture on hand.

Place it on the hot BBQ, it takes usually 15 minutes for the skewers to get cooked. Keep turning the paneer skewers after every few minutes so that all sides get some color evenly. Once it is evenly browned, remove the paneer and veggies from the skewers and serve with spicy coriander mint chutney. 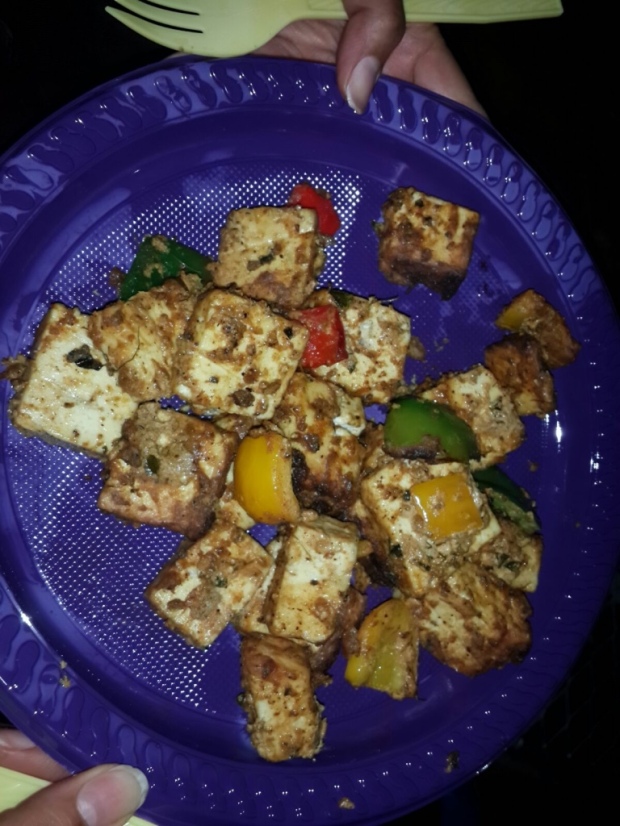 Unfortunately I do not have good pictures for the dish however this did taste good and the recipe will be a bookmark for any other BBQ parties I host.

I had used the same recipe before, here is a better picture I have from that BBQ party.

However I did make some changes to the recipe and this post includes my revised version.

Do try it sometime and let me know if you like it!

Somewhere in the middle of a desert, cooking on the BBQ, under the stars, next to the bonfire and tents set up, listening to some guitar and have an ensemble croon to melodies. Too much was happening around however I felt a sense of calm and happiness. This is how we welcomed 2016 and hope this be the best year yet for us.

Wishing everyone here as well a great 2016!